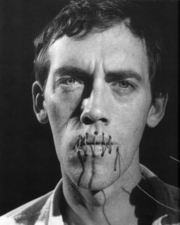 "FIRE IN MY BELLY"
Do not adjust your Internet. It is not the 1980's. But, given the recent controversy at the Smithsonian, one would be forgiven in thinking that the culture wars were back. On November 30th, prodded by the Catholic League, Representatives John Boehner (R-OH) and Eric Cantor (R-VA), demanded that the National Portrait Gallery remove David Wojnarowicz's video, "Fire in My Belly" from a current exhibition. Members of the religious organization found the video's strong sexual imagery and inclusion of Jesus covered in ants to be offensive and a direct affront to Christians during Christmastime. Sadly, the Smithsonian was quick to acquiesce to the demands and the video was removed from the exhibit. Although the Smithsonian is a public institution, this exhibit was privately funded. Read more "Weekend Art Picks, Courting Controversy" in KiptonART Magazine.