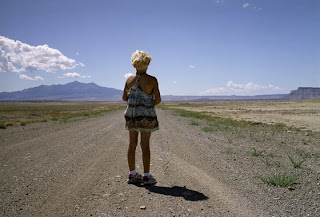 Shadow is a new video by Slater Bradley in collaboration with Academy Award-nominated cinematographer Ed Lachman. the primary inspiration for this new video work is the unfinished Hollywood Film Dark Blood (1993), which was never completed due to the untimely death of it's star, River Phoenix. Shadow represents a type of prologue to the original film. For more information, visit the Whitney Museum of Art. This video will be on view through January 23rd, 2011.

Slater Bradley and Ed Lachman, Production Still from Shadow, 2010, High-definition video, color, five-channel surround sound. Collection of the artists, Image Courtesy of the Whitney Museum of Art.
Posted by KiptonART at 9:53 AM