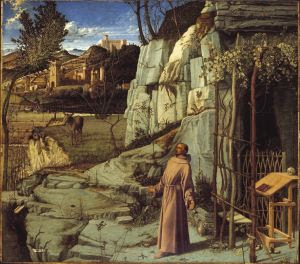 In honor of The Frick Collection's 75th Anniversary, KiptonART explores the halls of the Upper East Side establishment and the history of its famous artworks.

Stark white walls in overbearing rooms built for hoards of daily visitors challenge outsiders to feel welcome in a typical museum. However, The Frick Collection, unlike the other galleries stationed on Museum Mile, has managed to remain more Home-y than institutionalized. Perhaps because this is not a typical museum. Though more lavish than a dwelling of ones own, The Frick invites all to explore its mansion as a guest rather than a visitor. True the fine antique furnishings are roped off, not allowing those gazing in awe to rest their impressed minds. And true, unlike yours at home, the Frick's own living room houses old masters, Japanese porcelain statues and, most notably, a 1480 painting by Giovanni Bellini. The painting, St. Francis in the Desert (1480), is considered one of the best-preserved early renaissance paintings in the Western Hemisphere. The image shows St. Francis in rapture while receiving the stigmata, a powerful message.
Read more of Holy Frick! in KiptonART Magazine

Above, Giovanni Bellini, St. Francis in the Desert, oil and tempera on poplar panel
Image Courtesy of The Frick Collection
Posted by KiptonART at 12:11 PM